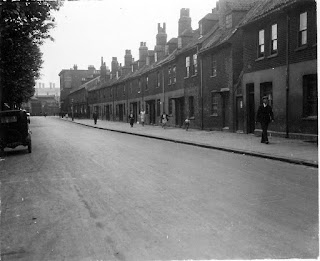 Old houses in Prince St, looking east, photo by permission of Lewisham Local History and Archives Centre. Thankfull Sturdee is known for his photographs of late 19th century Deptford, including those of Fowlers' Troop and the Deptford Jack in the Green, the modern version of which goes out around Deptford and Greenwich every May Day.   Fowlers Troop and the Deptford Jack in the Green He was also one of the earliest press photographers.  This new book brings together, for the first time,  nearly all of his Deptford photographs, a selection of his press photos and new research into his life and career. Sarah Crofts Comments from readers:  “the text [is] full of interest and clear throughout.  And of course the photographs!  The best, I think, are those in which buildings impose a strong presence.  ‘Old Joe’s Clothes Shop’ borders on the surreal; ‘Old House in Edward Street’ is sweetly charming.  And how I would like to have walked Old Flagon Row!” Thankfull Sturdee: Deptfor
Post a Comment
Read more